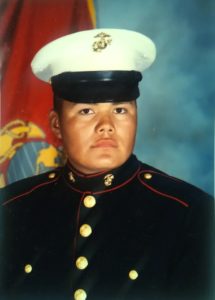 SHIPROCK, NM – Attention Honor Riders and all surrounding riding communities, the family of the late Wallace Aurthur Nez, are requesting for a funeral escort for their beloved veteran.
Corporal Wallace Aurthur Nez was enlisted in the USMC from 1990-1992, a Desert Storm Veteran, he was 51 years old.

Funeral service is to begin at 1130. After services are concluded Mr. Wallace A. Nez will be escorted to his final resting place at the Sheepsprings community cemetery. Reception following will be at Sheepsprings Chapter House. Donations accepted at Desert View Funeral Home.

On behalf of NHHR, we extend our sincerest condolences. We thank Mr. Wallace A. Nez for his great service he provided to our Nation. Thank you sir, for your service and our freedom. May you rest in peace and may you never be forgotten. God Speed.
Contact: Theron 505-406-2307