In memory of US Army SPC Lori Ann Piestewa 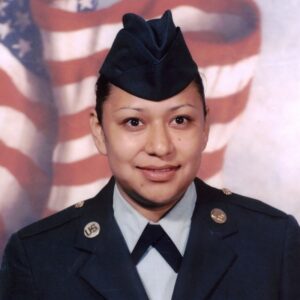 Just ask retired Army Col. Tom Spencer of Hampstead, N.C., about the impact of her death in Iraq.

He flew to Denver on April 9 so he could meet another retired military friend, drive nearly 500 miles to Piestewa’s hometown of Tuba City, Ariz., attend a memorial service for Piestewa on April 11 and donate money to the scholarship fund for her two small children.

That is just one small aspect of the bigger story that has captured worldwide attention. Consider:

** A national memorial for women military veterans in Washington is seeking items of Piestewa’s clothing for an exhibit.

** Tens of thousands of dollars are flowing into memorial accounts bearing her name.

** Newspaper articles and media requests from all over the world for interviews with her family and others who knew her continue daily.

** Piestewa, 23, has been the focus of spots on programs as varied as “Hardball With Chris Matthews” and “Good Morning America.”

** A move is afoot to rename Squaw Peak in Phoenix after Piestewa.

But why has Piestewa captured the world’s imagination and become a focal point for national grieving over all lost soldiers?

She is believed to be the first Native American woman killed in combat in a foreign war.

She has become a symbol of the danger for all women in the combat zone.

She came from the same environs that produced the famed Navajo Code Talkers of World War II, who have enjoyed a recent renaissance in the public spotlight because of last year’s movie “Windtalkers.”

And, with the number of U.S. war dead in Iraq at just over 150, the media focus on the victims has been concentrated and intense, especially on those with unusual backgrounds like that of Piestewa.

“People want to have some way to respond to all of this tragedy. And Lori, being a single mother, a Native American — in spite of everything she had to lose — went off and did everything she could do,” said Rep. Trent Franks, R-Ariz., whose district includes the Hopi Reservation in northern Arizona.

“Because she stands out as a little bit different, she gives us all someone with which to try to personify the losses we feel.”

“The thing that strikes me about this is where there are massive amounts of casualties, it is very difficult to make that real. So, there’s a tendency to pick one individual to focus on,” said Linda Grant De Pauw, president of the Maryland-based Minerva Center, a non-profit educational foundation supporting the study of military women and women in war.

“Her story brings a number of things together: the Native American element, a woman in war, being a mother, and the current military action. All of those are brought into focus in an emotional way,” De Pauw said.

To some degree, the nation’s collective grieving over Piestewa is a product of the speed and reach of modern media, eager to dispense the news that she was the first woman known killed in the Iraq war and possibly the nation’s first Native American woman ever killed in combat.

Eric Ehst, spokesman for the Phoenix/Scottsdale chapter of the National Organization for Women, said: “This is a woman who died for her country doing what she was supposed to be doing. She wasn’t some innocent bystander. She was young, a single mother and capable.”

“The Code Talkers alerted this country to the contributions of Native Americans in war,” Chischilly said. “And even though we are all very sad about the death of Lori Piestewa, her death gives us a great deal of pride about ourselves.”

Gary Laderman, a professor of religion at Emory University in Atlanta, is inclined to believe interest in Piestewa will be long-lasting.

“It’s hard to say,” he said. “But her ethnic-religious status as a marker of identity likely makes this something that will not just disappear. I imagine her name on mountains, streets and other kinds or forms of memorializations that will keep her in mind.”

PHOENIX — Plans are in the works to honor an Army private at the nation’s capital as the first known American Indian woman in the U.S. military to have been killed in combat.

Pfc. Lori Piestewa is to be featured in an exhibit set to open May 24 at the Women in Military Service for America Memorial, located at Arlington National Cemetery near Washington, D.C., and later at Memorial Day ceremonies there.

Piestewa was a member of the Hopi Tribe and lived near the Navajo Reservation community of Tuba City in northern Arizona. She was among eight members of the Fort Bliss, Texas-based 507th Maintenance Company ambushed in Iraq whose status was changed April 4 from missing in action to killed.

“To the best of our knowledge, she is the first Native American woman in U.S. military service killed as a result of combat,” said retired Air Force Brig. Gen. Wilma Vaught, president of the foundation that raised funds to build the memorial at Arlington.

Flags flown at half mast to honor servicewoman

WINDOW ROCK, Ariz. — The vice president of the Navajo Nation ordered that flags be flown at half mast on the reservation for two days in honor of a servicewoman killed in Iraq.

Army Pfc. Lori Piestewa, whose unit was attacked March 23 near Nasiriyah, was the first American servicewoman killed in the war and one of only a handful of American Indian women serving in the military. Piestewa was a member of the Hopi Tribe, whose reservation is surrounded by the Navajo Reservation.

“Lori Piestewa’s military service is a reflection of the dedication of our Native American soldiers who are defending our nation and traditional homelands in this time of war,” said Navajo Vice President Frank Dayish Jr.

“We should honor, respect and salute our committed military personnel serving in this conflict,” he said. “Our thoughts and prayers are with the Piestewa family.”

Dayish’s executive order asked that Navajo Nation flags across the reservation be flown at half mast on both April 7 and 8.