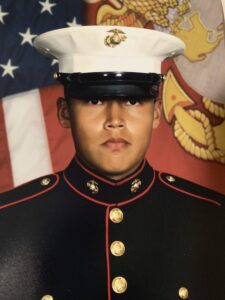 Gravesite service will be conducted for immediate family only. Thereafter, visitors may pay their respect immediately following services will be conducted in accordance with CDC and Navajo Nation Covid-19 guidelines to protect friends and family. Thank you for understanding and cooperating.

Kyrin Micheal Benally born November 3, 1998 in Chinle Arizona to Ernest & Evangeline Benally. He was orginally from Blue Gap, Arizona. He has four siblings, two younger sisters-Angelina and Ernesia and two brothers-Cody and Ethan. He graduated June 2016 from Murray High School, Murray Utah. He enjoyed sports such as football, wrestling, and baseball. March 2016, he enlisted in the Marine Corps-Sandy, Utah Recruitment Station. He served four years reaching the rank of Lance Corporal. He completed his boot camp at Marine Corps Recruit Depot San Diego. After competing boot camp, he was stationed in Marine Corps Base Camp Lejeune, North Carolina. March 2018, he was deployed to Europe. Upon his return from deployment in December 2018, he continued his training at Camp Lejeune. July 2019, he married Vaniesha Joe in Chinle, Arizona, whom he was married to at the time of his death. September 2020, he was honorably discharged and moved to Salt Lake City, Utah. He was employed with FedEx with plans to join the Salt Lake City Utah Police Academy. LCpl Kyrin Micheal Benally deceased March 04, 2021

On behalf of the Navajo Hopi Honor Riders, we send our condolences and prayers to the family of USMC LCpl Kyrin Michael Benally. We thank you for your service, you will never be forgotten. Rest in marine.