Tuba City, Az – Kelly sits on his Heritage Harley Davidson, he has been riding motorcycles since his teenage years. (photo by Geri Hongeva)

FLAGSTAFF, AZ – One of the most decorated Native American veterans I have ever ridden with while being a part of the Navajo Hopi Honor Riders, is a very humble man named Andrew Kelly Jr. from Tuba City, Arizona. He rides with a variety of motorcycle groups, all with a purpose he strongly believes in, supporting military families and other veterans. 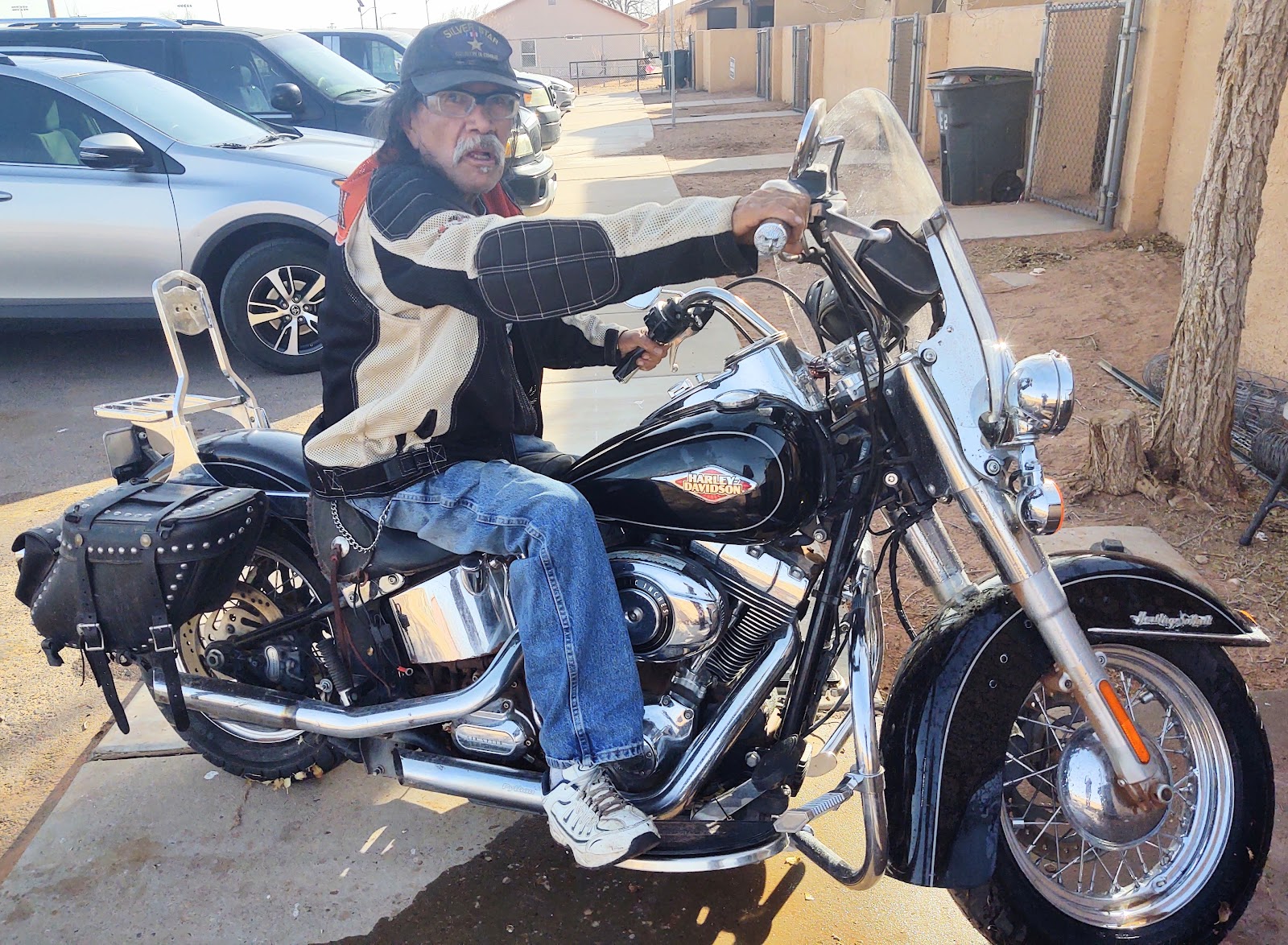 At first glance, Andrew Kelly Jr, 71 years old, appears to be an average biker wearing a Harley Davidson t-shirt, leathers and a veteran cap. As I have gotten to know him over the years, I started to see all the accomplishments he has done for his country, his community and his family. He is a family man, loves his children and grandchildren deeply.  He has five daughters and two sons, 25 grandchildren and 1 great grandchild. He has seven siblings and is the third oldest in his family.

As a young boy, he grew up in Sanders with his grandmother who only spoke Navajo. He remembers learning how to be independent at such a young age. “Just like herding sheep as a youth. You didn’t have a bunch of people around you, you did that alone, just you and the sheep,” stated Kelly.

As a teenager, Kelly later moved to Tuba City where his father is from. Kelly’s parents were educated; his mother was a teacher and was one of the first Navajo women to receive her college degree in Education from the University of Arizona in Tucson, Arizona. She dedicated her time teaching at Tuba City Boarding School until she retired, her name was Lorena Ann Puente Kelly. His father was a veteran and a carpenter


and was very skilled and a perfectionist. Kelly later started his own construction company with his son, which is still thriving today in the Phoenix area.

Kelly gives credit to his parents by never giving up on him. He explained to me that as a young boy, he would run away from boarding school and as a teenager, he was frequently in trouble. Kelly said that one day, his parents sat down with him and suggested that he enlist in the military. He never graduated high school but did receive his GED and enlisted into the US Army.

He comes from a family of military men, his father, Andrew Kelly Sr. was in the US Army during WWII and survived Omaha Beach. His grandfather, Charles Kelly was in WWI.

“Most of the men in my family have served in the military one way or the other. Protecting our relatives, our homeland. I’m not scared to die. I have been shot and stabbed. You learn to try and survive.” explained Kelly. 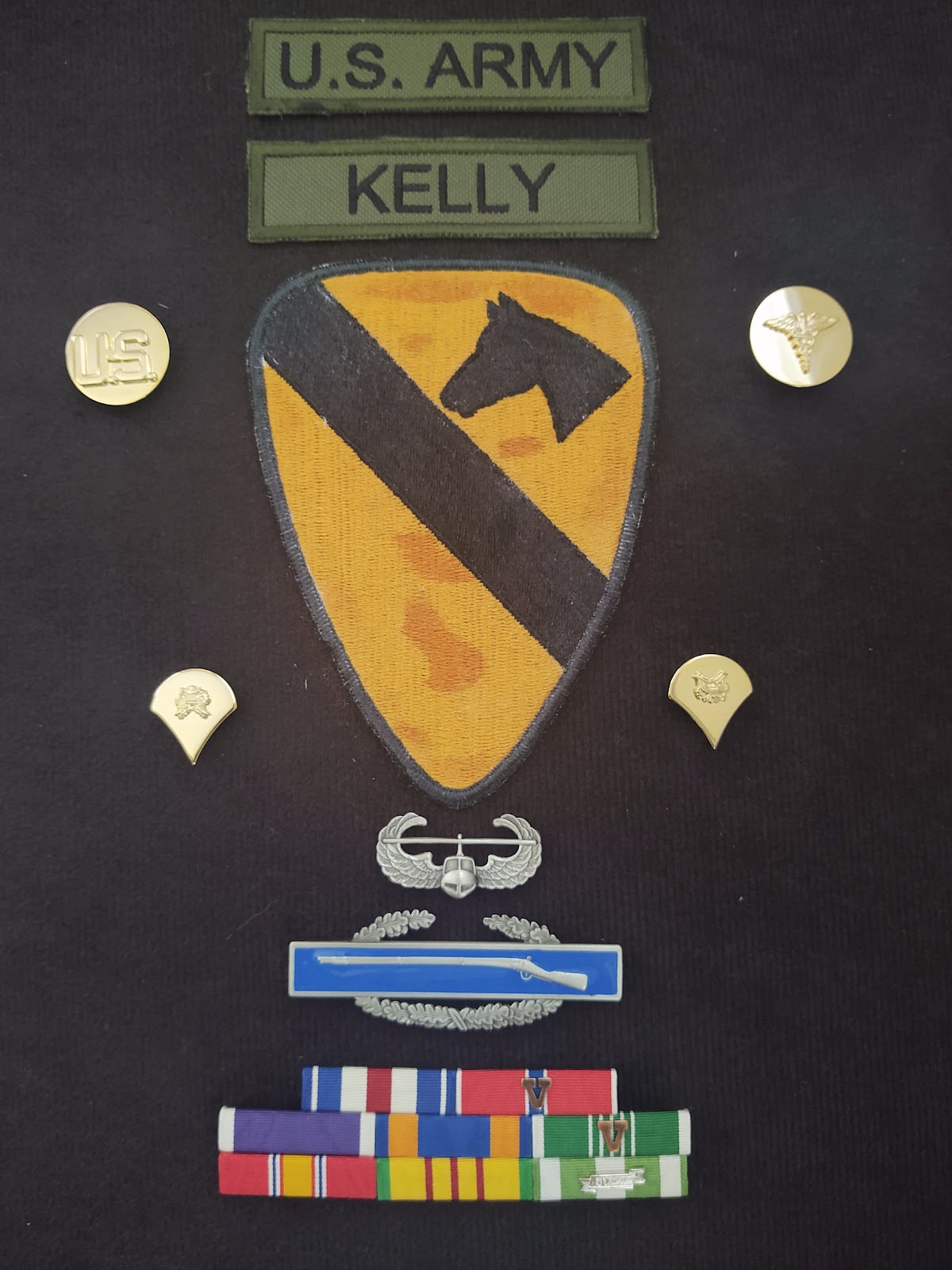 Kelly enlisted into the US Army on August 7, 1969, he succeeded in the US Army 1st Air Cavalry Division and served as an Army Medic with the rank of SPC4. While he served his country proudly, he also earned a number of medals and awards; the Silver Star, Bronze Star with combat V, Purple Heart, two Air Medals, Army Commendation Medal with combat V, National Defense Medal, Vietnam Service Medal, Vietnam Campaign Medal, and also the Air Assault Badge and Combat Infantry Badge.

“I am very proud of Andrew. We almost lost him in Vietnam due to injuries, fighting, and rescuing the men in his unit. The song that spoke to him the night before the big fight was “Spirit in the Sky.” Upon listening to the song, he knew something was going to happen and that he needed to pray. Our family believes and practices praying daily and praying for others. Our masani (maternal grandmother) raised him most of his early childhood. That is where he learned his traditional ways,” stated his younger sister, Victoria Kelly Curry.

After the military, he became very involved with the American Indian Movement (AIM) chapter in Denver, becoming friends with Vernon Bellecourt and Robert Burnette. They still keep in contact today. Kelly continued to excel in furthering his education and attended Grand Canyon College in Phoenix Arizona where he received his Bachelor of Arts degree in 1986.

Kelly currently resides in Tuba City, Arizona and has been trying to get his home built on his home site. He has been requesting assistance from the Navajo Veterans Office, but with covid-19 closing most of the Navajo Nation Administration Offices, it’s been very challenging for him. He enjoys his time with his children and grandchildren. He is so proud of their accomplishments in their own lives.

As I finished my conversation with him, he was very optimistic about life. Kelly practices a healthy diet and remains active the best he can. He concluded with, “Enjoy life, don’t worry about what other people think of you, just treat them good.”

He reminded me so much of my father, who was also a Vietnam Veteran. He died of Agent Orange in 1999. I must admit, while talking with Kelly, I imagined my father, he would have been his age.

“We have our traditions that we can lean on,” added Kelly.

The Navajo Hopi Honor Riders expressed their appreciation to US Army SPC4 Andrew Kelly Jr. by presenting him with a shadow box to display his medals and ribbons that he so selflessly earned to protect our freedom, his country and his people.

I look forward to riding with Kelly and enjoyed our conversation. I thank him for trusting me to share his story with me. Thank you for your service and welcome home brother.