501(c)3 not-for-profit corporation, a volunteer based organization and is governed by an elected board of directors

NHHR activities include an annual Honor Run to remember all Native American veterans who were “Killed In Action” since Lori Piestewa’s death in 2003, and the “Gold Star” families that were left behind after the sacrifice of these soldiers. American Gold Star families are immediate relatives of members of the U.S. Armed Forces who have been killed in combat or in support of certain military activities. The organization has also started recognizing and supporting “Blue Star” families in the community. American Blue Star families are those that have sons or daughters in active service in the U.S. Armed Forces and was originally formed during World War II.

NHHR also offers motorcycle escorts for funeral services or welcome home events for returning military service personnel, participates in community service projects to assist veterans with home improvement or remodeling projects to better suit physical or mental challenges resulting from their military service, and outreach events to build awareness regarding Post Traumatic Stress Disorder, and other difficulties faced by returning veterans or the families they leave behind.

Meet the Board Members

Bobby is Nakai, both Aztec and Mayan decent on his mother’s side and born for Tábąąhá (Water’s Edge Clan) he grew up on Navajo reservation near Window Rock, Az and born in Sacaton, Az.  He has a multicultural background and grew up with Navajo, Hopi and Hispanic influence. He graduated from Window Rock High School in 1988 and remains very active in his community on Navajo Nation with four daughters and his wife of 22 years, they reside in Tohlakai, NM. 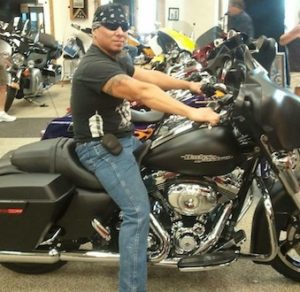 Bobby continued his higher education at a tech school and received his degree in marketing, advertising and design. He has worked for Navajo Times for over 20 years. When he is not working, he likes to ride his motorcycle, do some weight lifting and enjoys drawing.

He was one of the co-founders of Navajo Hopi Honor Riders and the cousin of Spec. Lori Piestewa, together with his family, they experienced first hand the loss of a fallen warrior in 2003.    It has became his mission to provide a strong support for Gold Star families and encouraging them during the annual honor ride. At age 47, he’s been passionately involved with honor riders for nearly 16 years and striving to help veterans in Native American communities.

Leon, a US Marine Corps veteran served from 1975-1981, he is a father of three and blessed with four grandchildren, he makes a home in Jamestown, NM. Leon was born in Rehoboth, NM in 1956, he graduated from Gallup High School in 1975 and received his automotive technology degree and liberal arts degree in 1982 from University of New Mexico. 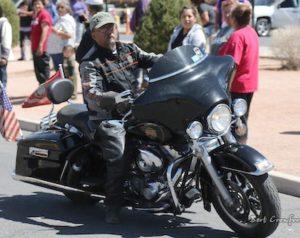 He is Tódách’íi’nii and born for Mą’ii deeshgiizhinii, his maternal grandfather is Tó baazhní’ázhí and his paternal grandfather is Honágháahnii. Leon is currently retired but continues creating beautiful jewelry as silversmith and a skilled artist. His enjoyable activities include team roping, following PBR, working outside and of course riding his motorcycle with his biker family or for solitude time.

He participated in the first honor ride for Lori Piestewa in 2003, and has been involved with Navajo Hopi Honor Riders since. When asked what inspired him to be a part of NHHR, he replied, “I have learned we as a people can comfort, and be there for families who have lost loved ones in the military. It has helped me heal as a Veteran, even if it’s one person to comfort a family, that makes a difference and means the world to those grieving by showing compassion.”

►Geri Hongeva-Camarillo currently works at Twin Arrows Navajo Casino near Flagstaff, Az.
Hongeva is Yei Dine Tachiinii (Red Running Into The Water Clan) born for Tsenjijinkini (Cliff Dwelling Clan). Her maternal grandfathers are Kinlichii’nii (Red House People) and her paternal grandfathers are Bįįh Bitoo’nii (Deer Spring Clan). She is originally from Black Mesa and went to school in Flagstaff and graduated from Coconino High School in 1992. She is a married to a Navy veteran and mother of two. Her father was a Vietnam Veteran. 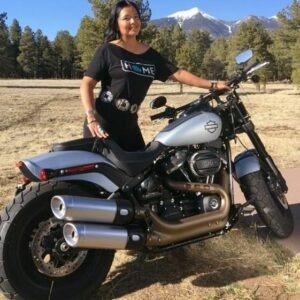 Geri has worked for Navajo Parks & Recreation  and Navajo Division of Natural Resources for a total of 8 years, she has heavily promoted travel and tourism on Navajo Nation.  She has also worked with NAU Anthropology for over 8 years and is very knowledgeable of Native American Cultural Preservation. She has a BFA degree in Visual Communication from Northern Arizona University. She speaks Navajo fluently, and is most recently known for her voice as C3PO in the Star Wars: Episode IV New Hope dubbed in the Navajo language, which has gained international attention for the Navajo Tribe and its language preservation.

Hongeva has also coordinated the Monument Valley Balloon Event consecutively for 4 years and continues to promote tourism on Navajo country. She is also a member of Arizona American Indian Tourism Association since 2008, helps coordinate the Arizona Indian Festival.

She is also a board member for Navajo Code Talkers Museum beginning March 2022.

She enjoys riding, her first ride with NHHR was back in May 2009. Remembering fallen warriors and showing appreciation for their service drives her to be a part of NHHR.

►Fred Begay, In the month of December 2018, the NHHR board members welcomed the newest board member Fred Begay, to assist with route planning and lodging details for the annual honor run. 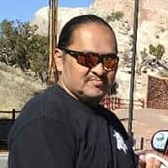 Begay is Naasht’ézhi Naadąą’ łigaii Tábąąhá, born for Tséńjíkiní, his maternal grandfather is Tótsohnii  and his paternal grandfather is Tsi’naajinii. He originally is from Steamboat, Az and now lives in Window Rock, Az. He graduated from Window Rock High School in 1989 and attended Tse’hootsooi Middle School. Fred enjoys being with his family and enjoys attending Pow wows, while his children like to dance. He is skilled at creating beadwork and enjoys motorcycle riding.

Begay has a passion to help veterans and the military families. He has family members who served in the military and has seen the sacrifice they have made. He has been an active rider with NHHR for more than a year and putting the veterans first and foremost. He has experience being on a motorcycle during his childhood.

One of the highlights for Begay during the honor run last year was when the riders stopped and the youth came out to welcome the honor riders. “The kids at Bodaway Gap Chapter come out singing traditional songs in Navajo and dressed so nicely for us. People say the language is disappearing, but to hear them sing in Navajo was good,” stated Begay. 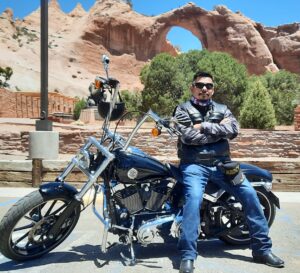 In February 2022, Hardy became a board member, he is from the Greasewood Springs community. Hardy who has filled the 5th vacant seat for the non-profit organization.

Hardy has a passion for volunteering for non-profit organizations for military families. He has a family, is career-oriented and enjoys playing his guitar. He is currently working as a Legislative District Assistant for the Honorable Raymond Smith Jr, 24th Navajo Nation Council at the Legislative Branch. He has been riding motorcycles for 25 years. You might see him riding his Harley Davidson Breakout around the Navajo Nation. 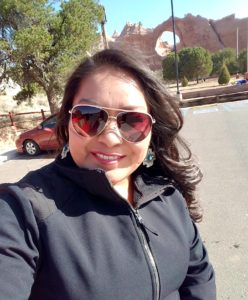 Janell Mann is Kinłichii’nii born for Bit’ahnii, maternal grandfather is Táchiinii, and paternal grandpa is Ashįįhi She is originally from Cameron, Az now resides in Jamestown, NM. Janell graduated from Tuba City High School then she attended University of New Mexico, Gallup Branch and she currently works as a Care Coordinator Clinical Operations with Presbyterian Health Services.

Janell has been involved in NHHR organization since 2003, and has participated in the annual honor ride. Her duties include being part of chase crew for riders, helping coordinate events throughout the year and hosting a stop for riders. “I enjoy volunteering and meeting new people,” stated Janell.

Her inspiration in volunteering for Navajo Hopi Honor Riders are family members who have served in the military, her sister served in the US Army, she also has a brother who served 13 years in the US Marine Corps.
“Supporting all veterans from all conflicts, being able to support them, and comforting the Gold Star families, as well as supporting Blue Star Mothers,” stated Janell.

Janell has three step children and very involved in community activities. Her hobbies include; riding motorcycles, reading and baking.

►Adolph Soliz Sr.
Adolph Soliz Sr. grew up in the Phoenix area, born at Good Samaritan Hospital, he currently lives in the Salt River Maricopa Indian Community.  His is both Mexican (Nakai) and Pima, from the Owl Clan. 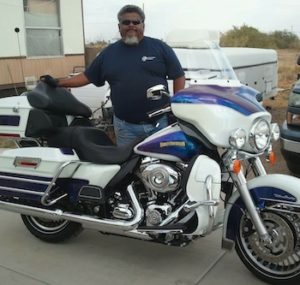 Soliz attended McClintock High School in Tempe, Az and graduated in 1981, he then furthered his education at University Technical Institute for automotive, diesel and mechanic school. He also has vast knowledge in telecommunications by working at Cox Communication for 22.5 years. He is retired now and enjoys working with on his woodwork projects, loves his two dogs and creates yard furniture. Soliz is married with two sons, two daughters and five grandchildren.

He began being actively involved with Navajo Hopi Honor Riders in 2011, he admires how the Native biker community has come this far, he especially wanted to help the NHHR non-profit organization to support Native American Gold Star and Blue Star families, both he and his wife have family members who have served in the military, he was also a board member from September 2016 to July 2020.