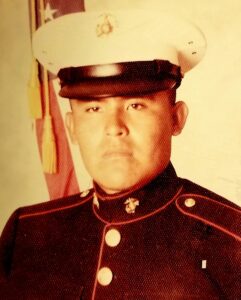 Graveside services for Tommy L. Nelson will be at 11:00 am on Monday, November 16th at Gallup State Veterans Cemetery. Pastor Jimmy Francisco will officiate. Nelson died on November 5, 2020 in Chichiltah, NM, he was 70. He was born September 4, 1950 in Zuni, NM to the late John B. Nelson and Bah Yazzie Nelson. His clans were The Red Cheeks People Clan and born for Within His Cover People Clan. Nelson graduated in 1969 from Gallup High School. He attended Haskell Indian Junior College and earned an AA Degree. He served in the United States Marine Corps and was honorably discharged in 1974. Nelson retired from Bureau of Education after many years as a Counselor. He served as a School Board Member for Chichiltah Jones Ranch Community School for numerous years. Nelson was the Chichiltah Chapter President and ran unopposed in the 2020 Navajo Nation Election. He served as Chichiltah Chapter President in 2000, 2002, 2012, and 2016. He also served as Vice President in 1996 and 2008.

He was elected as Probate Judge for McKinley County for two terms serving from 2010 to 2018. Nelson was also elected as McKinley County Board of Commissioners representing District II. Nelson was an avid Philadelphia Eagles and Boston Celtics fan. He enjoyed playing basketball and was well known for his basketball talent when he played for Gallup High School. He enjoyed spending time with his family especially his grandchildren. Nelson was a leader to his community and devoted to being a public servant for the Navajo Nation, McKinley County, and State of New Mexico. Survivors include his wife of 50 years Grace T. Nelson, son Titus Nelson, and daughters Cindy Burbank and Tammy Williams. Brothers Harry Nelson, Phillip Nelson, Harrison Nelson, and Larry Nelson. Sisters: Verdie Nelson, Ruth Nelson, Bernice Nelson, and Pauline Nelson. 16 grandchildren and 7 great grandchildren. Nelson was preceded in death by his son Reuben Nelson; parents John B. Nelson and Bah Yazzie Nelson; brothers Henry Nelson and Emerson Nelson, Sr.

On behalf of the Navajo Hopi Honor Riders, we send our condolences and prayers to the family of USMC Cpl Tommy L. Nelson. We thank you for your service, you will never be forgotten. Rest in peace marine.